Home > News > Presentation of the Simone Veil Prize of the French Republic (3 March (...)

On 3 March 2020, during Equality Week, the Simone Veil Prize of the French Republic was awarded to the Ecuadorian group “Vivas Nos Queremos” by the Minister for Europe and Foreign Affairs, Jean-Yves Le Drian, and the Secretary of State for Equality and the Fight against Discrimination, Marlène Schiappa.

This prize, presented for the first time in 2019 by the French President, is awarded to a person or group which is working to promote the rights and condition of women and/or for gender equality. It shows France’s commitment alongside those who drive women’s rights around the world.

This year, the Simone Veil Prize was awarded to the Ecuadorian group “Vivas Nos Queremos” which emerged in 2016 during a march organized for the International Day for the Elimination of Violence against Women, at the initiative of parents of femicide victims. The group works to change legislation and mentalities to better take into account the issue of violence against women and access to sexual and reproductive rights. Two members of the group, Ruth Maribel Montenegro and Kruvskaya Nela Vargas Reinoso, were present to receive the prize on behalf of the group.

The first Simone Veil Prize of the French Republic was awarded by the French President on 8 March 2019 to Aïssa Doumara Ngantansou, co-founder of the Cameroonian association ALVF, committed to fighting violence against women and early marriage.

The feminist foreign policy spearheaded by the Ministry, which will be demonstrated this year through events including the Generation Equality Forum, and France’s resolute commitment to drive gender equality are two major themes of this year’s Equality Week. 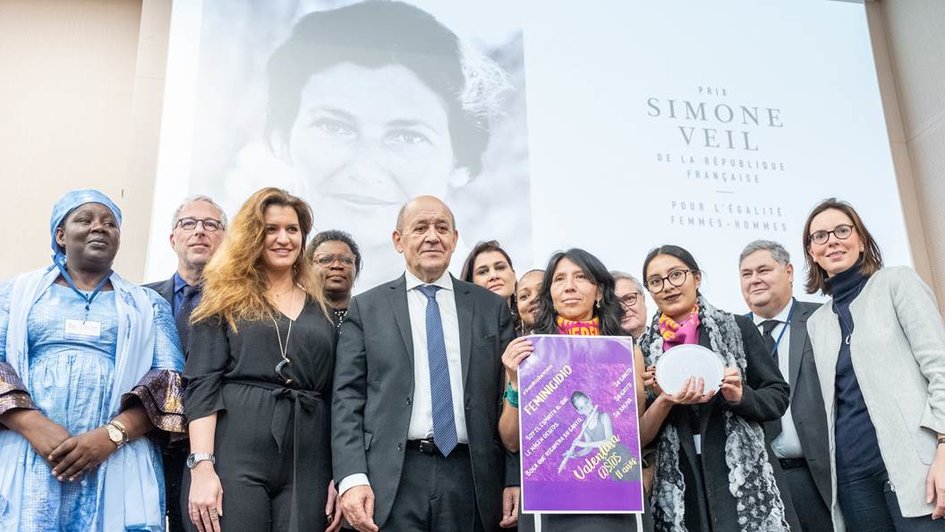