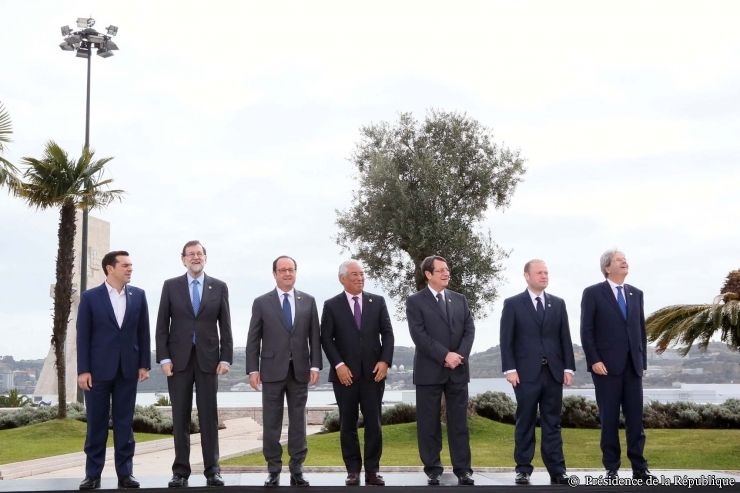 1- We, the Heads of State and Government of the Republic of Cyprus, France, Greece, Italy, Malta, Portugal and Spain, have met in Lisbon for a second Summit of the Southern EU Countries on 28 January 2017.

2- Following our first meeting in Athens and the adoption of the Athens Declaration on 9 September 2016, we confirm our aim of enhancing our cooperation and of contributing to a strong and united European Union.

3- We believe that in a world confronted with growing uncertainties and instability, we will be stronger by acting together. Weakening Europe is not an option.

4- The European Union must uphold our values of freedom, democracy, rule of law and respect and protection of all human rights, address common challenges the Member States are facing and deliver concrete answers to the real concerns of our citizens : employment, economic growth and social cohesion ; protection from the threats of terrorism and uncertainty ; a brighter future for the younger generations through education and jobs ; and a central role for culture and education in our societies.

5- To this end, the Union must act according to the principles of solidarity and subsidiarity, improve the functioning of its Institutions and ensure their democratic accountability. It should also aim to increase the involvement of all actors in society, namely the local and regional authorities.

6- The United Kingdom has brought a useful clarification of its intentions on its future relationship with the European Union. We are ready to begin negotiations after receiving the Article 50 notification with the hope to have the UK as a close partner of the EU.

7- We reiterate our support to the ongoing process for the reunification of Cyprus, without guarantees, in line with UNSC Resolutions and the EU acquis and under the leadership of the new Secretary-General of the United Nations. We recall that the Republic of Cyprus is and will remain a member of our Union after the settlement, and that EU membership is the best safeguard for a reunified Cyprus.

8- After the Bratislava meeting, and under the Maltese Presidency of the European Union, the Informal Malta Summit and the Rome celebration of the 60th anniversary of the Treaties of Rome will provide the opportunity to debate and decide on the direction and clear objectives for the European Union. With that in mind, we have agreed to focus our work on the following priorities and measures :

I – Fostering Investment, Growth, Employment and Convergence in Europe 9- We share the urgency of promoting investment, growth, employment, with special focus on youth employment, and convergence to allow our citizens to enjoy economic well-being and prosperity. We should also implement the Single Market Strategies, in particular the Digital Single Market, the Energy Union and the Capital Markets Union, to foster competitiveness.

10- Work is needed on deepening the EMU, to ensure that the monetary union functions effectively and its benefits reach all citizens. We need clear proposals to complete the EMU and close the economic divergences and asymmetries aggravated by the Eurozone crisis. Completing the banking union by mid-2017, ensuring an adequate level of public and private investment and making progress towards convergence in the social and tax fields should be top priorities.

11- In this context, we encourage the timely and successful conclusion of the second review of the Greek programme in the framework of the European acquis, in full respect of democratic and constitutional values, in the interest of the whole Euro Area.

12- We should complement the action by the ECB with a fiscal policy that enables the right policy mix to ensure sound fiscal consolidation, while supporting investment to strengthen the economic recovery. We also strive to reduce excessive imbalances, promote greater inclusiveness and reduce inequality in our pursuit of economic growth. We need to consider the proposals put forward by the final report of the High Level Group on Own Resources, advance in fiscal integration by developing a truly European oriented fiscal policy and prepare the discussion on the setting up of a fiscal capacity for the Euro Area.

13- We support the extension and strengthening of the European Fund for Strategic Investments, but we reiterate the need to go further in addressing the investment gap existing in many Member States and regions. Investment projects in Member States with high unemployment and cross-border projects of common interest that foster innovation and market integration should be promoted. We envisage a new virtuous circle of convergence in Europe, driven by increased public and private investment that strengthens the economic recovery, creates new and better jobs, reinforce the impact of structural reforms and support the transition to a new growth model.

14- We want the European Pillar of Social Rights to be strengthened as a fundamental element in preserving and further developing the European social model and welfare state. We agree on the need to fight social dumping by addressing issues related to fraud, abuses and circumvention of rules.

15- We need to develop a robust trade policy based on fair exchanges, the promotion of our standards and the safeguarding of our way of life. Protectionist reactions are not the right answer.

II – Ensuring the internal and external security of Europe 16- Security should remain a top priority on the European agenda.

17- We strongly support the EU Global Strategy and its core political message : making the EU a credible force for peace in our region, a reliable security provider and a guarantor of our citizens’ wellbeing and security.

18- We express our commitment to fully implement the European Council conclusions of 15th December 2016, with a view to achieving strategic autonomy, strengthen our capacity to deploy operations and missions and better coordinate our defence programmes, including through the reinforcement of the European Defence Agency. Work is also to be taken forward on the implementation of the Joint EU-NATO Declaration of July 2016, in full respect of the decision-making autonomy of both organisations.

19- Based on our special knowledge and proximity to the partner countries in the Mediterranean and in Africa, we remain particularly vigilant regarding the situation in the region. We particularly support the development of the European Union’s capacity to conduct military operations and civilian missions in that region, in cooperation with African partner countries.

20- We need to step up efforts to implement the European Union Internal Security Strategy and to effectively ensure the interoperability, coherence and access by our security forces to our information systems and data bases. We can only fight terrorism if we concentrate on improving information exchange and operational cooperation between law enforcement authorities. We want to preserve the Schengen area without internal borders. That requires strong cooperation and the adequate instruments to effectively manage and control the EU’s external borders thereby ensuring the security of EU citizens. The full operationalisation of the European Border and Coast Guard Agency as well as systematic security checks are important steps in the right direction.

21- We attach a great priority to prevent radicalisation and recruitment by terrorist groups in our own societies. We should focus on the social exclusion present in some of our cities, and the important role it plays as one of the root causes for radicalisation. That is why we believe a European investment programme should be designed to enable the regeneration of our cities in all its dimensions : urban planning, economic activity, law enforcement, social services, healthcare and education.

22- Special attention should be paid to the victims, who have directly suffered the scourge of terrorism.

III – Migration and Reinforcing cooperation in the Mediterranean and with African Countries 23- We share a common understanding about the challenges we face in our broader southern region. As such, we will engage commonly with our European partners in order to promote development and growth in our southern neighbourhood and contribute to its stability and security.

24- We need to support the efforts of our partners to ensure their own security as well as to fight against irregular migration and to address more effectively the root causes of migrations. We support the full and non-discriminatory implementation of the EU-Turkey Statement as well as close cooperation with Asian partners, particularly in developing robust readmission and return procedures. We welcome the approach of the New Partnership Framework for Migration, and the implementation of the La Valetta Action Plan, as well as the new European Fund for Sustainable Development. Since the EFSD will promote investment and economic development in Africa, we encourage a proposal to extend its beneficiaries to other African countries and regions.

25- We need to build these partnerships with the African Countries of origin and transit based on trust, close and regular cooperation, and a flexible approach. The Malta Summit will give us the opportunity to address the situation in the Central Mediterranean routes, and to explore new pathways of cooperation with the Libyan Government, in full respect for human rights and international law. Much of the outcome of such a process will depend upon the stabilisation of the situation in Libya and the effective involvement of GNA, to whom we reiterate our support.

26- The principles of responsibility and solidarity within the EU towards the Member States in the Mediterranean most affected by the migratory pressure must also continue to be the cornerstone of our policy. This includes the review of the Common European Asylum System, making it more effective and more convergent in particular towards the front-line states. It also includes the immediate intensification of the current relocation process as well as ensuring adequate secondment of personnel to FRONTEX, EASO and other EU mechanisms which are supporting the reception and asylum systems of front-line states. IV – Way ahead

27- The European Union needs to deliver and progress, in a balanced and concrete way, on all these fronts. Real changes must be felt in citizen’s lives.

28- We defend the urgency of the EU to focus on effectively responding to the new challenges, namely in the security and defence area. In order to achieve this goal, it is essential to conclude an equally important area of progress by completing and reforming the EMU, ensuring a resilient and cohesive Eurozone and thus allowing the euro to fulfil its original role.

29- We believe this is the way to build a shared prosperity by all Member States and reinforce the unity and sense of purpose of the European project.

30- The next Southern EU Countries Summits will be held in Spain and, after, in Cyprus.